WHAT YOU NEED TO KNOW

Heather Pidcoke, a lymphoma patient, is among the first to receive CAR-T cells created at the Gates Biomanufacturing Facility just steps from CU Anschutz.  Now she is in complete remission.

Created at the Gates Biomanufacturing Facility a few steps from CU Anschutz, the chimeric antigen receptor T cells, or CAR-T cells, are being infused into patients with difficult to treat or frequently recurring cancers at UCHealth University of Colorado Hospital.

It’s the first cellular immunotherapy project where the developmental science, regulatory filing and approvals, manufacturing process and infusion of patients in clinical trials have all been done at CU Anschutz.

Heather Pidcoke, 56, a physician, medical researcher and now a patient, was among the first to receive the locally produced `UCD19 CAR-T cells.’

She was diagnosed in 2014 with follicular lymphoma, a slow growing but often recurring cancer. Since then, Pidcoke has endured multiple chemotherapy cycles, most recently going into remission in 2018 before her lymphoma returned again in 2020.

She and her oncologist, Manali Kamdar, MD, an associate professor of medicine at the University of Colorado School of Medicine, decided to watch and wait.

At this point, Kamdar told her of the clinical trial and she quickly enrolled.

“It takes courage and it takes a lot of faith in science to do this,” Kamdar said. “And I think her medical background helped.”

Pidcoke knew of CAR-T cell therapy. She also knew it was reserved for the most difficult cases.

“As a resident I treated patients, as a researcher I worked on things that affected patients but it is different being a patient,” she said. “Still, I have dedicated my life to research and I think it is important to take an active part in it.”

Genetically Altering a Subset of Cells

Physicians at the CU School of Medicine took samples of Pidcoke’s own blood lymphocytes. The Gates Biomanufacturing Facility then separated out a certain subset of cells that were cultured and genetically altered to recognize and kill cancer cells.

“They can create an environment of inflammation. Patients can get a fever, shortness of breath, and sometimes neurological side effects that can affect speech and cognition,” Kamdar said. “We see side-effects in about 15-30% of patients. Thankfully, we now know of strategies to mitigate them. However, our goal is to develop new ways of administering this therapy with excellent efficacy and less toxicity.”

Pidcoke earns a living with her mind so potential neurological damage weighed heavily on her.

“You meet those trepidations with prayer, trust in science, and resolve,” she said. “I prayed for my brain to be protected.”

She checked into UCHealth in late September for a two week stay. She was given Benadryl to tamp down side-effects, then infused with the Gates-engineered CAR-T cells.

Kamdar feared the lack of side-effects meant the treatment wasn’t working. Then Pidcoke’s next scan revealed something extraordinary. Every tumor in her abdomen had melted away. After 90 days, she was in complete remission with no side-effects.

The other patients in the trial have also seen encouraging results.

‘The UCD19 trial is a huge milestone. It shows we can deliver,  offering real results and hope for patients and their families.’

– Diane Gates Wallach, co-chair of the Gates Center Advisory Board

“This is the realization of years of innovative research and meticulous preparation,” said Michael Verneris, MD, professor of pediatrics-hematology/oncology and director of Bone Marrow Transplantation and Cellular Therapy at Children’s Hospital Colorado. “New capabilities at the Gates Biomanufacturing Facility make CU Anschutz one of the few academic medical campuses in the nation where bench science can move to manufacturing and on to patient treatments all within walking distance.”

Verneris, who co-leads the Tumor Host Interactions program in the CU Cancer Center, said the new trial “closes the loop” for patient-centered research in Colorado.

This approach, enrolling patients who have no other viable therapeutic options, will expand to pediatric patients at Children’s Hospital Colorado in early 2021.

Hopes for Treatments of Other Cancers

Past trials employing other CAR-T cells, saw remission in about 60% of previously untreatable adult lymphoma cases and in approximately 80% of pediatric patients with resistant leukemia. Scientists hope this trial will prompt the development of new CAR-T therapies and lead to the eventual treatment of other forms of cancer.

“We believe our ability to support on-campus clinical trials will lead to multiple similar efforts in the near future by other Gates Center researchers in other disciplines, and continue to bolster the reputation of the Gates Biomanufacturing Facility and CU Anschutz as a leader in the manufacture and administration of academic and commercial cellular therapies,” said CU School of Medicine Dean John J. Reilly, Jr., MD.

The Gates Biomanufacturing Facility was launched just five years ago.

“The goal was to develop and produce clinical grade biological products and cellular therapies from bench research through trials to patient care,” said Diane Gates Wallach, co-chair of the Gates Center Advisory Board. “The UCD19 trial is a huge milestone. It shows we can deliver, offering real results and hope for patients and their families. Congratulations to the entire team.”

Pidcoke is now back at work as chief medical research officer at Colorado State University. She looks forward to kayaking again and roaming the foothills with her husband and dog near her home outside Fort Collins.

She has no symptoms and feels `wonderful.’ 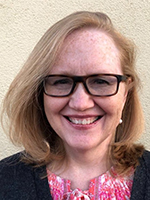 “I have had just fantastic doctors who have been warriors with me in meeting this challenge and I know they will be there again if necessary,” she said. “I have learned to live in the moment and not let the good moments of today be overshadowed by what could happen in the future.”

“The cells worked beautifully,” she said.

Heather Pidcoke was among the first patients to receive the locally produced UCD19 CAR-T cells. She now has no cancer symptoms.